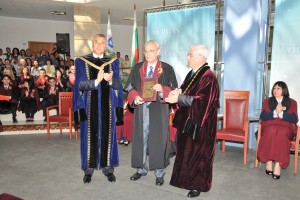 On the occasion of the 20th Anniversary of the establishment of Burgas Free University Academician Anton Donchev was awarded the honorary degree of Doctor Honoris Causa of Burgas Free University by the Academic Council (19.11.2010) for his outstanding contribution to the development of Bulgarian fiction and Bulgarian national identity, as well as the spiritual image of the city of Burgas in the country and abroad.

Anton Donchev, one of the most prominent Bulgarian writers, was born on September 14, 1930 in Burgas. He graduated from the Law Faculty of Sofia University in 1953. He is the author of numerous short stories, articles, novels, film scripts. He is a master of the epic genre with international popularity. Some of his famous novels are The Awakening, A Saga for the Time of Samuil, Time of Violence, A Saga for Khan Asparouh, Royal Prince Slav, and the High Priest Teres, The Strange Knight of the Holy Book. These are not only examples of high literature, but also a true research of the Bulgarian history and way of life. 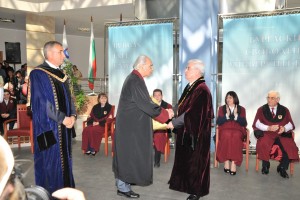 His novel Time of Violence still remains the most famous Bulgarian novel in the world literature. It has been published 17 times in Bulgaria in one million copies and has been translated into over 28 languages in two million copies. It was nominated in the USA for best historical novel.

In 1999 for his lifetime achievement Academician Anton Donchev was awarded the prestigious literary prize "Balkanica". In 2003, Bulgarian Academy of Sciences awarded him the highest degree - academician, as the most prominent representative the historical novel in Bulgaria and renown master of the epic world.

Academician Donchev is cavalier of the highest state honor - The Order of Saints Cyril and Methodius, collar, which is awarded by the President of the Republic of Bulgaria for merits in the field of culture.