His All Holiness, Bartholomew I, the Ecumenical Patriarch 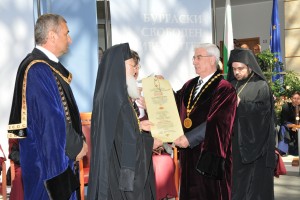 His All Holiness, Bartholomew I, the Ecumenical Patriarch, was awarded the honorary degree of Doctor Honoris Causa of Burgas Free University (26.03.2010) for his honorable ecclesiastical devotion and service in the name of spiritual revival and tolerance among the religious communities.

Patriarch Bartholomew I is the 270th and current Archbishop of Constantinople - New Rome and Ecumenical Patriarch, since 2 November 1991. As such, he ranks as primus inter pares ("first among equals") in the Eastern Orthodox Church, and thus regarded as the spiritual leader of world's 300 million Orthodox Christians.

Bartholomew was born on 29 February 1940 in the village of Zeytinli, in the island of Gökçeada (Imvros in Greek), Turkey, with the birth name Dimitrios Arhondonis. He is a Turkish citizen and he belongs to the small remnants of the native Greek community in Turkey. Dimitrios Archontonis attended elementary school in his native Imvros and continued his secondary education in the famous Zographeion Lyceum in Istanbul. Soon afterwards, he studied Theology as an undergraduate at the Patriarchal Theological school or Halki seminary, from which he graduated with highest honours in 1961, and was immediately ordained deacon, receiving the name Bartholomew. Bartholomew fulfilled his military service in the Turkish army as a non-regular officer between 1961 and 1963. 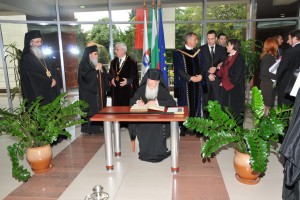 From 1963 to 1968, Bartholomew pursued his postgraduate studies at the Pontifical Oriental Institute in Rome, the Ecumenical Institute of Bossey in Switzerland and the Ludwig Maximilians University of Munich in Germany. His doctoral research was on the Canon Law. The same year he became a lecturer in the Pontifical Gregorian University in Rome. After returning to Istanbul in 1968, he took a position at the Patriarchal Theological Seminary of Halki, where he was ordained a priest in 1969, by Ecumenical Patriarch Athenagoras I. When Demetrius I became Ecumenical Patriarch in 1972 and established the Patriarchal Office, he selected Bartholomew as its director. On Christmas of 1973, Bartholomew became Metropolitan of Philadelphia, and was renamed as director of the patriarchal office until his enthronement as Metropolitan of Chalcedon in 1990. From March 1974 until his enthronement as Ecumenical Patriarch, he was a member of the Holy Synod as well as of many Synodical Committees.

He speaks Greek, Turkish, Italian, German, French and English; he is also fluent in classical Greek and Latin.

Doctorates: The Pontifical Oriental Institute (Gregorian University). Thesis titled “The Codification of the Holy Canons and the Canonical Constitutions in the Orthodox Church.”

Memberships: “Society of Canon Law of the Oriental Churches,” founding member and vice-president; “Faith and Order” Committee of the World Council of Churches (W.C.C.), vice-president; Fellow of the Orthodox Academy of Crete, Greece; honorary member of the Pro-Oriente Foundation in Vienna; honorary citizen of numerous cities in various countries.

Conferences and Delegations: Fourth General Assembly of the World Council of Churches (W.C.C.), (Uppsala 1968); Sixth ( Vancouver 1983); Seventh (Canberra 1991); member of Executive and Central Committees of the W.C.C.; Numerous inter-Orthodox and inter-Christian meetings; Official delegations to the Turkish Government, Orthodox and non-Orthodox Churches, and Mt. Athos; Presided over the Preparatory Inter-Orthodox Committee for the Holy and Great Synod, which dealt with the subject of the Orthodox Diaspora (1990); International Summit on Religious and Conversation, Atami, Japan (Session I, 1995), and Windsor Castle, Great Britain (Session II, 1996); World Economic Forum (Davos, Switzerland, 1999); Inter-religious Prayer for Peace (Assisi 2002); Many interfaith and intercultural meetings in Turkey.

Messages: The European Parliament at its plenary session on April 19, 1994; VI. General Assembly of the World Conference on Religion and Peace (WCRP) in Riva del Garda, Italy (1994); U.N.E.S.C.O. General Assembly (1995); The United States Congress upon being awarded the Congressional Gold Medal (1997); The United Nations World Conference against Racism, Racial Discrimination, Xenophobia, and Related Intolerance, Durban, South Africa (2001); Official Visit to Iran “The Contribution of Religion to the Establishment of Peace in the Contemporary World” (2002), and many others.