Jaap de Hoop Scheffer was awarded the honorary degree Doctor Honoris Causa of Burgas Free University (14.03.2008) for his outstanding contribution to freedom, peace, democracy and his constructive cooperation with Bulgaria within NATO and the Organisation for Security and Cooperation in Europe in the name of security and stability in the broad Euro-Atlantic Region.

Born in Amsterdam on 3rd April 1947, De Hoop Scheffer graduated with an LL.M. degree at Leiden University in 1974. After completing military service in the air force, where he became a reserve officer, he worked for the ministry of foreign affairs from 1976 to 1986. For the first two years, he was stationed at the Dutch embassy in Ghana. After that, he worked at the Dutch delegation at NATO headquarters in Brussels until 1980. He was in charge of the private office of four successive Ministers of Foreign Affairs (Van der Klaauw, Van der Stoel, Van Agt and Van den Broek) until 1986.

Mr De Hoop Scheffer was elected to the House of Representatives of the States General for the Christian Democratic Alliance (CDA) in June 1986. He became the party’s spokesperson on foreign policy (as well as asylum and refugee policy and European justice matters) in the House and served on the Permanent Committees on Justice, European Affairs and Defence. From 1989 to 1994 he chaired the Permanent Committee on Development Cooperation.

From 1986 to 1994 he was also a member of the Parliamentary Assemblies of the Council of Europe and the Western European Union (WEU). In 1990, during the Gulf crisis, he served as WEU rapporteur on the consequences of the invasion of Kuwait and continuing operations in the Gulf region. From 1994 to1997, he was a member of the North Atlantic Assembly.

He served as deputy leader of the CDA parliamentary party in the House of Representatives from December 1995 to March 1997, when he was elected leader.

In October 2001, he resigned as leader of the parliamentary party and as the political leader of the CDA. From November 2001 to 15 May 2002, he chaired the House Permanent Committee on Foreign Affairs.

The Netherlands held the Chairmanship of the Organisation for Security and Cooperation in Europe (OSCE) in 2003. Mr De Hoop Scheffer was the Chairman-in-Office of that organisation until 3 December 2003. 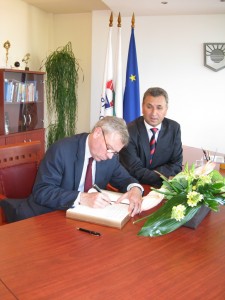 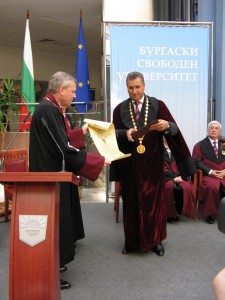